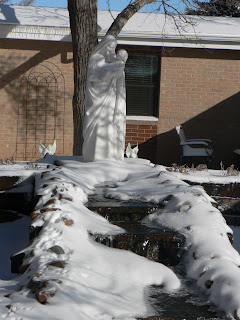 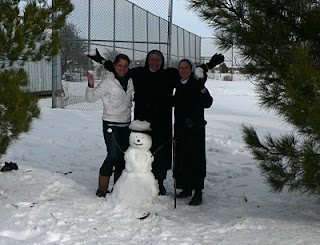 We had a beautiful snow the other day, and today we had a snowball fight. It was great.
United in prayer, The School Sisters
Posted by Sr. Mary Michael, OSF at 5:03 PM 1 comment: 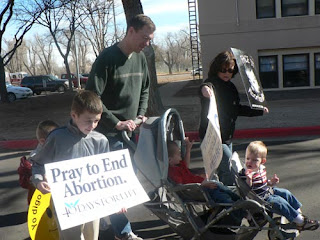 This young family of 9 is praying for the end of abortion. Jesus, please help us!
Posted by Sr. Mary Michael, OSF at 6:29 AM No comments:

Some of our Sisters are at the diocesan Walk for Life this morning. They will walk from a Peace and Justice Mass at one church to Texas Panhandle Family Planning, the offspring organization of Planned Parenthood, to pray the rosary and then to another church for lunch and a talk by the diocesan director of Respect Life Ministries. All of this will mark the sad anniversary of 37 years since Roe vs. Wade.

And I am sadly aware that some of the Sisters who are supposed to be here are not walking for life at all, because they were aborted.
Posted by srmaryana at 9:07 AM No comments:

God is a Beautiful Artist! 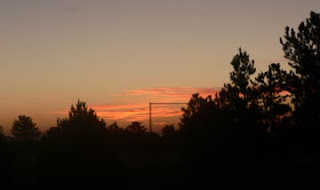 Almost every morning during breakfast, we have the most glorious view! He blesses us with this beautiful painting in the sky and reminds us of His Love for us and His awesomeness!
Today is the anniversary of the Roe v. Wade decision that made it possible for legalized abortion. Pray with us for the end of this tragic ongoing slaughter of innocent human beings, the healing of the aches of the mothers and families involved, and for the conversion of abortion doctors!
Posted by Sr. Mary Michael, OSF at 6:54 AM No comments:

Today is the Feast of St. Berard and Companions!

Today is a very special feast in the Franciscan Family! St. Berard and companions lived at the time of St. Francis. They were sent to try to convert the Muslims in Morocco. After preaching to the sultan, he became very angry with them. The friars were tortured in unspeakable ways. After that, they actually tried to bribe them with money, wives, and power. They refused and continued to try to teach the sultan about the truths of the Church and God.

The sultan was so angry that he ended up killing them himself on January 16, 1220. After St. Francis heard of the martyrdom, he said, "Now I can truly say that I have five Friars Minor!" It's amazing -- when the relics of these martyrs were being carried through Portugal, St. Anthony of Padua (who was an Augustinian at the time) was inspired to become Franciscan! He wanted to be a martyr too.

These martyrs were canonized in 1481. May we allow God to use us in powerful ways as well! Lord, open our hearts to your amazing ways!
Posted by Sr. Mary Michael, OSF at 12:56 PM No comments:

Welcome to our Mother General! 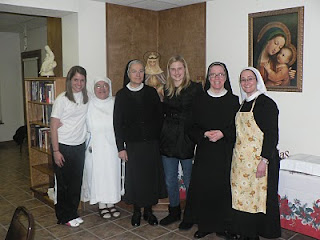 We welcomed Sr. M. Petronilla, our Mother General from Vienna, a few days ago! Here she is pictured third from left with some other guests and with the Sisters.
God bless you all!
Posted by Sr. Mary Michael, OSF at 5:41 PM 1 comment: