Mary's Month (May) is a beautiful time and opportunity for grace! St. Catherine Laboure recorded in her diary in 1843,

"Imitate Mary.
Place everything in her Immaculate Heart, in this sanctuary in which our Lord deigned to live. The three virtues of our holy state: humility, simplicity and charity . . . are the basis of our vocation. . . ."

This is beautiful -- as women representing the Church, we want to let Mary love people through us! People need a "mother's" love, and sometimes spiritual mother's can give some of that love . . . .

St. Catherine refers to the month of Mary for herself and her Community as a great source of grace! This is for us too! In these last days of May, let us entrust everything to Mary, the Mother of Jesus and our awesome spiritual mother.

Mary, pray for us! Lead us always closer and closer to the Holy Trinity of unbelievable Love!!! Help us to trust Him and to abandon ourselves to Him every day! Amen.
Posted by Sr. Mary Michael, OSF at 7:50 AM No comments:

Be Not Afraid - Open Wide the Doors to Christ! 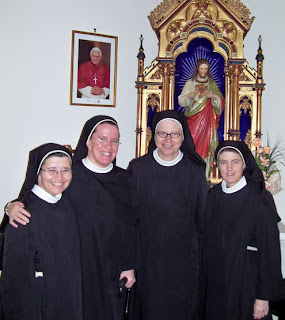 Today is the "World Day of Prayer for Vocations"!

In Father's homily this morning (it was a great homily by the way), he said something like this, "The Sisters lose themselves for the good of the Community."

I pondered those words, and they are true. But the higher truth is that the Sisters also FIND THEMSELVES in their vocation. It is precisely in us "losing" ourselves that we find ourselves.

Isn't this true of every vocation? As we die with Christ we rise with Him?!

It's the paradox of the Gospel! It may sound grim, but it isn't. God is so good and so full of life and love! We will never be sorry for following Him and trusting Him (to whatever vocation that is). He's where's it's at!

You are a Priest Forever! 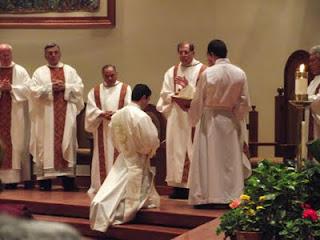 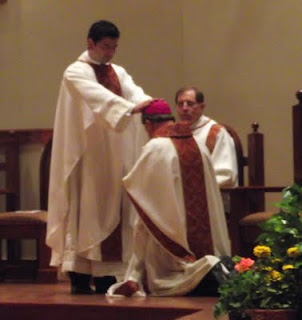 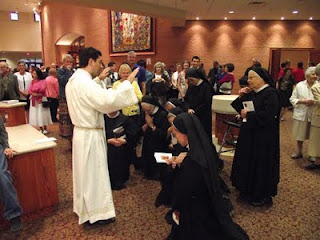 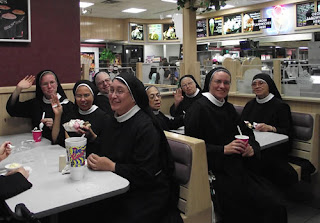 Another ordination for a priest for our diocese!!! Fr. Haider was ordained last evening at St. Mary's Cathedral. It's always touching to see someone donate their lives to their vocations! His parents were there from Columbia. Wow. They too are donating . . . they are giving their son, in a certain sense, to the diocese of Amarillo and to her people.

2nd picture -- the bishop is the first to receive the new priest's blessing.

3rd picture -- our Sisters asked him for a blessing right after Mass!

4th picture -- out for ice cream on the way home! 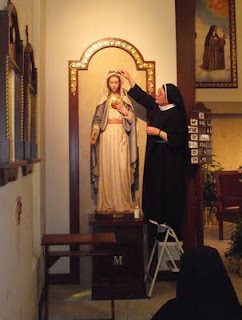 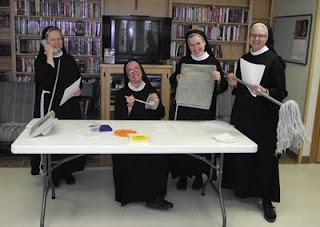 [sorry - thought this was posted last week. We had Internet problems when trying to upload it and it obviously didn't go through. . . oops!]

It has become our custom to do a "May Crowning" on Mother's Day to celebrate our awesome Mother Mary! We also process in with candles with our own earthly mother's name on it, praying for her and in great gratitude for her life and everything she was for us. Mom's are SO special!

Bottom picture is from a little skit we did for Sr. Jean Marie for Mother's Day -- we took Francesca Battistelli's "This is the Stuff" and converted it to a convent song. You'd have to live in one to understand it....

According to the truth of the Theology of the Body, every woman is a "mother". Every woman is called to be a spiritual mother! Some are called to be a physical mother. May all women remember this. May Mary teach us more and more every day what it means to be a woman of faith and a true mother in our vocation.

God bless you all! We remain united in prayer.

We Were Blown Away 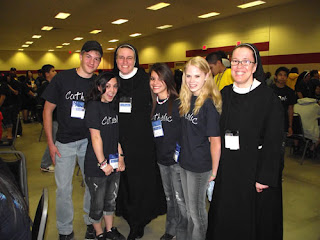 We didn't get to go to all of it, but we were able to hear one speaker . . . he "blew us away". His name is Sal Solo. He grew up in England, went to Catholic School, and thought that church was boring and that a life of sin would be the place to find fun and fulfillment. His ultimate dream was to become a rock star.

We thought he meant like Elvis Presley or something. No, he proceeded to show us an MTV video of himself. Ooh. It wasn't pretty.

He said, "I had everything. I was driven around in limosines, stayed in the best hotels in the world, women that I had never met wanted to marry me . . . but I wasn't happy."

Wow. The power of a sincere prayer! (I've heard several conversion stories like this where people cry out to Him and He somehow reveals Himself! He is SO awesome!)

One thing that amazed us was his creative video integration during his talk.

Another thing that was insightful (is that a word?) was how he today is raising money for the poor. On a YouTube video that we found of him, he said that when he was traveling the world as a rock star, God was touching his heart by showing him the poor. He wasn't prepared to see people living on the street and hungry. Now he does a lot of social work for the poor of the world. Check him out on his website. Very interesting person! He's using his musical and technology talents now for God. No one is beyond God's reach and grace!

So much going on with end of school banquets, awards ceremonies, preparing final exams, etc. Also, so much to pray for in the world -- let us stay united in the Mercy of God and His Infinite Love for us!

God bless you all!
Posted by Sr. Mary Michael, OSF at 5:03 PM No comments: